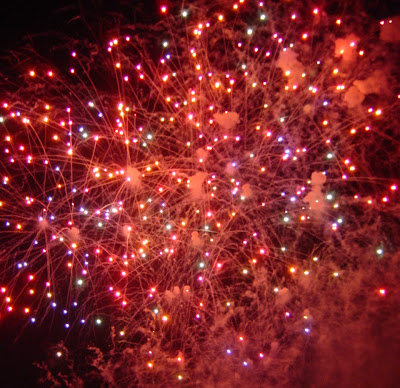 Hope I got that right...
*
As we had six sleepy children on premises, we ended up skipping the final drinks and tea after the fireworks, but it was a grand six hours of eating and drinking in the new year. May you have a good 2008 with a sufficient scattering of joys and the pleasantest of surprises!
*
For a few more menus (wish I'd kept track of these for the past decade), click on the "New Year's Eve" label.
*
Michael’s Sour Blackberry & Sweet Walnut Salad

½ sour cream
1½ cup walnuts
1 cup brown sugar
½ cup granulated sugar
Mix sour cream and sugars together in heavy-bottomed pan and boil at 240 degrees (soft-ball stage). Mix nuts in and stir around until coated. Take out and spread on wax paper and separate with two forks. Sprinkle with cayenne.

Wash and separate a head of butter lettuce. Divide lettuce among six salad plates. Top with: four sour blackberries; about an ounce of roquefort; a half dozen candied walnuts.

Dressing: cup of olive oil to ¼ cup lemon juice, one clove of garlic, salt and pepper.
* * *
Upcoming Event: Dan Braum and I'll be reading at KGB Bar in NYC on January 16 at 7:00. p.m. I may read narrative poems and a small story. Hop here to find out who we are and more!
*
****
Photo credit: The photograph of fireworks is courtesy of www.sxc.hu/ and Peter Hall of Valencia, Spain.
Posted by Marly Youmans at 7:00 PM