Paean to The Long Grass Books, no. 4: In the Morning 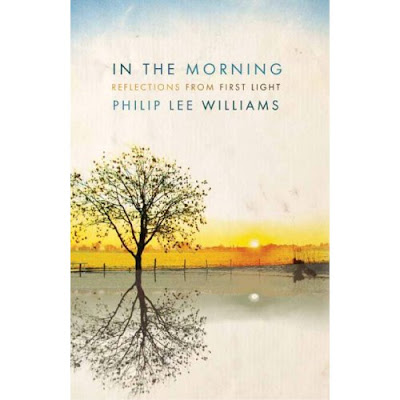 Update, 13 June: Now this must be what contitutes the thing known as "perfect timing." An interview with Philip Lee Williams, done several years ago, has just come on line at The Istanbul Literary Review. It's an enlightening encounter between Phil and William Walsh. Phil talks frankly about worldly success, his books, the assaults on his heart, introspection, publishers, and much more.

Here's a clip: "To me, the great part of being a writer is the writing. All the rest of it is business stuff. When something great happens with the business stuff, you have two hours of happiness. When something really hideous happens, you say 'crap,' and you have two hours of being disgusted. It really isn't much more than that after you have been around for a long time. You don't sit around and get ecstatic except when you write. And of course I treasure it when someone says they love my work."

In a world where poetry professors gift their own students with major prizes and one little monkey scratches another's back, I'm reluctant to review this nature book, because the author is a penpal of mine. I've never met him, but we've exchanged many emails since 2001, when we were supposed to be on a panel together. Thanks to a bad back, we didn't meet at the Southern Festival of the Book, but now when I read In the Morning: Reflections from First Light, I know a lot about the author and the people and places he mentions.

So this will not be a review.

It will be, however, an attempt to shed light.

Feel free to leave a comment, as always, but if you have any questions for the author, ask away, and I'll pester Phil for an answer.

In the Morning is a classic Long Grass Book. I imagine that many people won't recognize the publisher: Mercer University Press. The copy I ordered is a trim, well-made hardcover, and the fact that Mercer chose to publish Philip Lee Williams is a credit to the press.

In the Morning is Phil's twelfth book, a kind of love song to his home state, its flora and fauna and people; in the past few years, the state of Georgia has been regularly laureling him with awards for his body of work (novels, poetry, and nonfiction), so the feeling must be mutual. Phil's a creative man, and he's a notably kind and tender-hearted man, so all the attention he has gotten lately seems especially pleasing.

To show the spirit of the book, I'm going to offer a variety of passages from it. And I'll append a few comments from other people who have admired its qualities.

Now, though, the mud has been washed away, and once more the creek is shining, sparkling. Murphy and I have come down to look for stones and artifacts, and already I have found an enormous amethyst crystal, pale purple and perfect, and a rim-sherd from a clay pot made on this land more than a thousand years ago. p. 28

At first, they appear almost black, like charcoal outlines in a book of nature identification, but soon their raw sienna paints itself on their flanks. The ivory spots that speckle the fawns come out like constellations. And their eyes are brown, what I see in the mirror each day, but much more alert, purposeful, and unknowing. The doe's right ear flops toward something I cannot hear. p. 34

Crickets that produce these sounds also have "ears"--on their front legs. (Stridulating grasshoppers have "ears" on their first abdominal segment.) Some species can make sounds at a mind-boggling 100 kilohertz, though humans wouldn't know it, since the higher range of our hearing ability is about 20kHz.

Which means that what we hear of this morning cricket chorus is a fraction of what's actually out there. (Lest we feel superior, one species, the snowy tree cricket, actually recites the temperature. Add forty to the number of chirps it makes in fifteen seconds, and you'll have the temperature in Fahrenheit. Science is full of fascinating and moderately useless bits of such information.) p. 64

It's early on a foggy spring morning, and we have already uncovered the clear outlines of the fort, bastions and all. We have found the skeleton of a man who we believe is Lt. Coytmore. We know his body was buried inside the fort, and it's the only such burial here. Looking on his skeleton, laid out neatly, I feel a shudder of sorrow for the man and his stupidities. p. 101

The mangrove-lined shore was probably half a mile away. Our houseboat bobbed several yards behind me in the Gulf of Mexico. I remembered well enough what you do not do around a shark: thrash and make a lot of noise. So here I was, in the middle of a spreading pool of blood, wearing sneakers. The shark came up then, and I could see his blood-drenched mouth and the 3-inch-long teeth and his wild, dead eyes. p. 120


Wise, engaging, and unfailingly profound, In the Morning awakens our weary senses to a whole cascade of mornings...
--Amy Blackmarr, author of Above the Fall Line and Going to Ground


Like morning itself, this book is quiet, gentle, and enlightening.
--Janisse Ray, author of Ecology of a Cracker Childhood, Wild Card Quilt, and Pinhook


...Williams has found nature where millions of us live--just as Thoreau once found it on the edge of bustling, antebellum Concord.
--Edward Larson, Pulitzer Prize winner for Summer for the Gods: The Scopes Trial
*
Posted by Marly Youmans at 4:00 AM