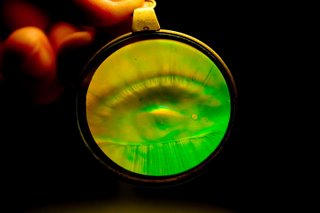 no. 55 Let your poems be as a piece of news heard on a distant planet, lit by a green star.

no. 54 Like a fairy mound, the poem wants to be a place where you and time get lost.

no. 53 Gusto is in the marrow of poetry.

no. 52 Only fearlessness in poetry will ever win the laurel. Fearlessness is not the same as “risk.” No American poet has ever committed “risk” in a poem. Revised after reading the comments!

no. 51, or the pollen-tube poetry aphorism: In the little green room of poetry, an egg waits for the magical unfurling of a hallway and a door to let the pollen in.

The photograph of a holographic eye was found on the sxc.hu website and is used by permission of Georgios M. Wollbrecht. Many thanks!

For more aphorisms, take a slide down the page.

. . . the qualities I'd suggest are essential if something is going to be called a poem, among which I' d say were a definite inner and outer design, an unassailable sense of itself as something made and not to be broken or tampered with, and a complete resistance to paraphrase. --from Martin Stannard, “The Question That Has to Be Asked,” in Stride Magazine (U. K.)

In the last century, many a poet found himself bleeding on the thorns of life planted so assiduously by Edgar Allan Poe in his guise as critic. Here's a little something written for readers of poetry in Cooperstown, but perhaps interesting elsewhere as well. William Wilberforce Lord was a poet of considerable fame until he fell into the clutches of Poe. Lord also has the distinction of having been rector of the Anglican church at Vicksburg during the Civil War's great Siege of Vicksburg. After poking around the web, I conclude that he must have hopped from Christ Church Cooperstown to Christ Church Vicksburg. A dangerous leap! Later on, he returned to the Village of Cooperstown. He is buried in a plot overlooking the lake, not in the Christ Church graveyard.

Curious about the former rector of Christ Church, William Wilberforce Lord, the poet pilloried by Edgar Allen Poe? It’s said that Father Lord dared to parody Poe’s “The Raven.” Poe proclaimed the following in print: “The fact is, the only remarkable things about Mr, Lord’s compositions, are their remarkable conceit, ignorance, impudence, platitude, stupidity, and bombast. We do not know, in America, a versifier so utterly wretched and contemptible.” If you would like to see for yourself, hie yourself to the web and visit http://www.bartleby.com/248/index14.html, where you may find a number of Lord's poems. (The headings on individual poems confuse him with the famous abolitionist, William Wilberforce.)

If you like poetry, you may find something familiar here, because the poems are workmanlike pieces with a sensibility that evokes the English Romantics and our own William Cullen Bryant. The little wandering blind girl at “The Brook” harks back to Wordsworth’s rural figures and the love of the English Romantics for the rural and common man. “Worship,” with its mingling of faith and wild, romantic nature, could be a page out of Bryant: “For them, O God, who only worship Thee / In fanes whose fretted roofs shut out the heavens, Let organs breathe, and chorded psalteries sound: But let my voice rise with the mingled noise / Of winds and waters;--winds that in the sedge, / And grass, and ripening grain, while nature sleeps / Practise, in whispered music, soft and low / Their sweet inventions, and then sing them loud / In caves, and on the hills, and in the woods.” Like the Romantics, he is a devotee of all the arts; his narrator listens in rapture to a great singer as “a cloud of sound, / Rising in wreaths, upon the air around / Lingered like incense from a censer thrown.”

Clearly he sought to place himself on the highest ground as a poet, and his “Ode to England” praises a pantheon of contemporary poets—among whom he no doubt wished to place himself. Here is the close of his passage on the death of Keats: “Into that gulf of dark and nameless dread, / Star-like he fell, but a wide splendor shed / Through its deep night, that kindled as he fell.” Though he invokes Keats as Endymion, beloved of the Moon, in a reference to one of Keats’ own poems, Lord’s blank verse conjures up the blank verse of Milton’s Paradise Lost, with Satan falling like a star from heaven—a “twist” on the former image, and an expression of lost heavenly power.

Drop by www.bartleby.com and take a look. You’ll see what appears to have been Lord’s most famous poem, “On the Defeat of a Great Man,” and some creditable verse, by no means deserving of Poe’s gleeful roast. Unfortunately, Lord the poet did not manage to be the defeated “Great Man” whose enemies “fall who give him not / The honor here that suits his future name” and “towers aloft.” Achievement in poetry has never been doled out on the basis of personal goodness and contentment, and the anxious, fevered Poe sits in that pantheon where Lord wished to sit. Yet Lord was as much or more what Hawthorne called “the artist of the beautiful,” the maker who has snatched at and seized high goals, and who may look on the destruction of his art with equanimity.