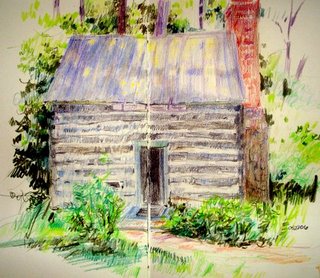 I had the fun of being a pick--or perhaps I should say, one quarter of a pick--as well as the fun of being asked to contribute a pick. It is pleasant not to be wholly forgotten at home, even when one has been dragged away to a Yankee snow drift. The heat kicked on this morning. That's June 12th. It has been known to snow here in July...

And here's my choice:

"Measured by my desire to reread, Welty's stories reign. ... I knew the stories in high school, and had the scary thrill of eating lunch with their sharp-witted author at college. And all these years later, I still want to go hunting for a drowned bride with William Wallace and to sit on a stile in the rain with Virgie Rainey, listening to the magical beat of the world." -- Marly Youmans.

*****
I am the only non-Algonquin writer of that foursome... I have a wide, deep respect for Louis Rubin--a writer of fiction and nonfiction, a critic, founder of the Hollins College writing program, holder of a chair at UNC, and founder of Algonquin Books.

Take a look at the list before it vanishes into archives. It's fun to see what the "picks" are. Mine was the first Library of America volume awarded to a living U. S. writer.

**************
I know the eminent Mr. Keillor does not waltz by the Palace at 2:00 a.m. However, the e-aetherial plaints and comparisons emitted by the Palace may have wafted west and touched his tender sensibilities, because on the morning of the 13th, he read a poem by Yeats and one by Wilbur. No dull professors drinking coffee and reading the newspaper with a dog. No women having to pee while chatting on the phone. No lack of music and general scratchiness on the ear. Hooray!I hope he'll have a greater number of contemporary poets who have a love for singing-school in the future.

**************
The picture above is from Laurelines, the blog of Laura Murphy Frankstone (Creative Commons license). And it's a writer's cabin--once belonging to playwright Paul Green--now ensconced in the botanical gardens at Chapel Hill. I often paused there, and my children always loved to peek into the loft and run in and out the doors. I love the shimmery light on the tin roof in this drawing.

As you can see--or not see--that's a complete fiction because the Blogger image upload has been ailing lately, and at the moment it's as dead as a crooked old roofing nail. You'll have to imagine it, visit Laura, or wait until Blogger rises from its sickbed--and then I shall add the playwright's cabin. Picture anon, I hope.
Posted by Marly Youmans at 4:00 PM