from the Pest House: reading Epstein

One of the few pleasures of having my third miserable Yankee bug of the fall is ignoring some of the work that needs to be done for a family of five and doing a little extra reading. Yesterday I reread some Singer stories ("Gimpel the Fool," "The Mirror," "The Wedding," and more) and 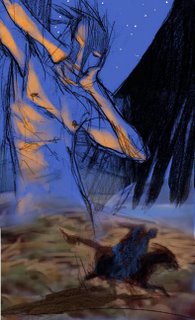 One of my very favorite essays is Joseph Epstein's "What Yiddish Says: The God-haunted fiction of Isaac Bashevis Singer." Epstein is unfailingly amusing and interesting, with breadth and depth and thoughtfulness and even a certain desirable humility when he confronts the mysteries of life. All this I admire. So one of the things I have read with pleasure during the current plague is his essay about Edmund Wilson in Commentary.

Epstein finds Wilson falling short in grasping "the mysteries," and says that such lapses lead to shortsightedness: "I suspect his difficulty with Joseph Conrad and Franz Kafka, two major writers whose power he could never quite comprehend, stemmed from the fact that each took as his subject, precisely, the complex mystery of life: Conrad on the cosmic level, asking why we are put on earth; Kafka on the level of human nature, asking why we are as sadly and comically limited as we are." I especially like the preface to his glancing-but-damning blow, saying that Wilson "traveled light": "One of the advantages artists have over critics is that they can be nearly complete damn fools and still produce interesting and important, even lasting, art. Critics are not permitted such large margins of stupidity. It matters that they get things right; their opinions, which is all they chiefly have, are crucial. Wisdom, in a critic, is never excess baggage."

Today's picture is another Renato Alarcao sketch, one of the proposals for the new cover of The Curse of the Raven Mocker. I'll put the choice for cover up next.
Posted by Marly Youmans at 1:22 PM