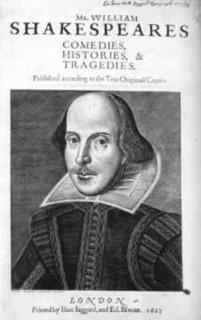 Ah, another candidate for Shakespeare! The more the merrier—back in high school I scribbled a paper about Shakespeare “really” being the Earl of Oxford. And I thought that it mattered for a few addled days.

It appears that we still can’t believe that an Elizabethan of middling rank and moderate education—though how many of us these days have even “small Latin, and less Greek”?—might actually wield a pen with lightning power. Nor can we fathom that imagination might allow him free access to both hovel and throne room.

Perhaps it is our day that blinds us; after all, we invented the worship of celebrity, and our latest awards are the “Quills,” given not to the best but to the bestselling writer. We grow unaccustomed to the idea that a potent writer might be a person of some modesty, and that he might stand with humility before the mysteries of life and death. Humility, despite all mastery…

And so we find it impossible that such a person—having dipped his feathered pen in an immortal ink bottle—could retire from London and choose a village life with what was left of his family. We find it difficult to conceive that he might very well have been taught by his own words that both kings and commoners end in a handful of dust, and that he might have left The King's Men and departed for a country life “in content / To liberty, and not to banishment.”
Posted by Marly Youmans at 4:22 AM