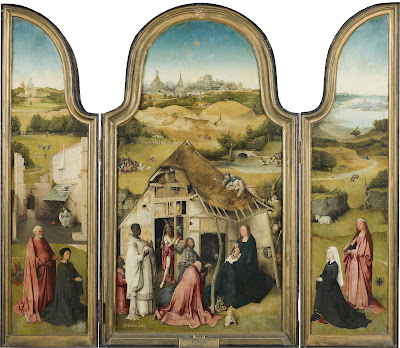 "The Adoration of the Magi or The Epiphany is a triptych oil painting on wood panel by the Netherlandish artist Hieronymus Bosch, executed around 1485-1500.[1] It is housed in the Museo del Prado of Madrid, Spain." Public domain. Wikipedia files. 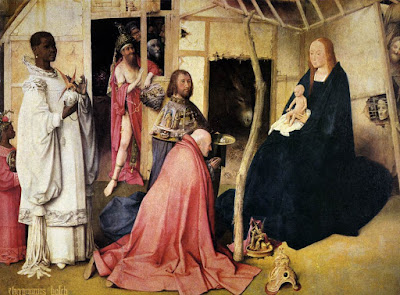 The Magi--Gentiles drawn by the call of light--offer their gifts. The gold, highest metal on the chain of being, suggests the baby's high kingship. Frankincense was burned on the Temple altar, rising like prayer toward God. Myrrh was linked to the anointing of Jewish priests and the Temple, and was used to embalm the dead. Just as we often see the baby Jesus of ancient icons lying in a manger that resembles a tiny sarcophagus, so myrrh invokes the sacrificial death to come.
Posted by Marly Youmans at 8:39 PM

Email ThisBlogThis!Share to TwitterShare to FacebookShare to Pinterest
Labels: Epiphany