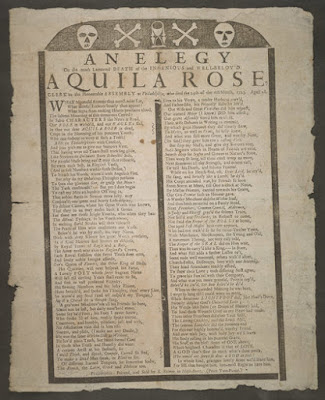 Well, I do like this new find! Printed by Benjamin Franklin when he was seventeen... The NYT claims for him "burning ambition and something of a punk-rock visual sensibility," a thought which might or might not have amused him--he was an amusing fellow--but is a silly one. The broadside looks like nothing so much as the slim, arch-topped, skull-and-often-hourglass-surmounted tombstones of early America. Benjamin Franklin doesn't need tarting up as a contemporary of ours, I say.

I love his Autobiography, its contradictions and buried humor. He can be quite grand and ambitious and make me laugh at the same time: "It was about this time I conceived the bold and arduous project of arriving at moral perfection." Of course, he soon finds out that he is incorrigible in a number of areas. Nevertheless, he has a tidy list of desired virtues, ending with "10. Humility. Imitate Jesus and Socrates." Now that's funny. More funny than punk-rock Ben! 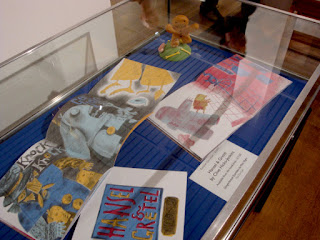 In other news, I have my Clive Hicks-Jenkins Hansel and Gretel, and you should too. The graphics are strong (for that matter, Gretel grows strong!) and wondrous, full of cunning details and bursting with bold images that--by some peculiar Clivean spell--manage to charm and delight while also grasping for what is cruel and grotesque in the Grimms' tale. The lively color-separation pictures, including four fold-outs, are propulsive and thrust the story forward. It's not a book for a little child, but it does pay lovely homage to the tradition of the European children's picture book.

Buy it here. It is worth every little coin you might spend, and would make a fine present for anyone who loves story and powerful and beautiful images. To see more images, scroll down through Clive's posts on the making of the book. They'll give you a dose of respect for the labor behind the making of the book, too. 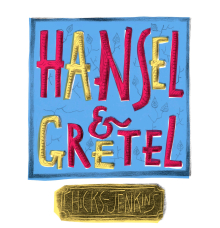 And the secret novel

And now I am going back to the abandoned-for-a-time novel (sometimes too many other demands happen--that's our life, of course), which I am reading and remembering and starting to write again. A curious thing I have learned this week so far: It is now thought that the Wampanoag Nation was decimated (before the arrival of the Mayflower) by rat-borne leptospirosis complicated by Weil's Syndrome, rather than by smallpox, bubonic plague, etc. Squanto or Tisquantum appears to have been a later victim of the disease. I'm impressed by how much European activity there was along the coast in the sixteenth century--fishermen and whalers and fur traders. Leptospirosis still afflicts people in various parts of the world, and it doesn't take much in the way of rat urine to make a person ill.

And I've discovered the word nabbity, applied to a small but full-grown woman. I myself am rather nabbity, having lost more than an inch of late. I also like ruttling, to make a harsh or rough sound in breathing. I am reading Robert Forby's The Vocabulary of East Anglia. Unfortunately, I have only the second volume... That was not clear when I ordered it. So I shall have to find the first. Oh, and jig-by-jowl? Close together.
Posted by Marly Youmans at 11:52 AM