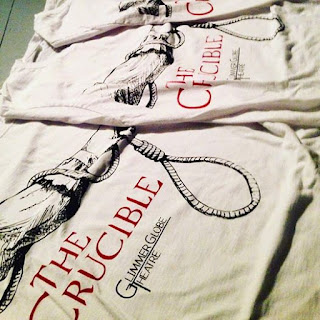 For this family, it is the last of the summer theater season tomorrow. My husband and eldest son were in Arthur Miller's The Crucible--nine wonderful performances over the summer, set in the new amphitheater beside the lake, under the changing moon and the stars--GlimmerGlobe Theatre, sponsored by the Fenimore Museum. On the last night, my daughter's silkscreened t-shirts for cast members, adapted from the poster, went to the theater. The two of us sat in the grass by the stone seats, and ducks flew out of the lake and visited us there. One night an eagle sailed over. Flitterings meant bats. Most miraculous, not one Wednesday night show was rained out, though it did sprinkle a bit one evening.

The two family actors were also Box and Cox in the nineteenth-century farce, performed on Sundays at 12:30 on the outdoor stage in front of Bump Tavern in the Farmers Museum. They have their last performance tomorrow. All these theatricals have made the summer even more busy than usual, but I have enjoyed being an audience to my own family.


Wikipedia: Box and Cox is a one act farce by John Maddison Morton. It is based on a French one-act vaudeville, Frisette, which had been produced in Paris in 1846.

Box and Cox was first produced at the Lyceum Theatre, London, on 1 November 1847, billed as a "romance of real life." The play became popular and was revived frequently through the end of the nineteenth century, with occasional productions in the twentieth century. It spawned two sequels by other authors, and was adapted as a one-act comic opera in 1866 by the dramatist F. C. Burnand and the composer Arthur Sullivan, Cox and Box, which also became popular and continues to be performed regularly.
Posted by Marly Youmans at 9:00 PM