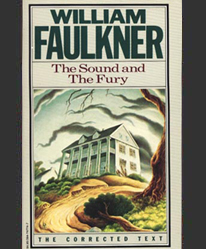 I had forgotten this wonderful Paris Review interview until Brenda Bowen quoted a line from it on Facebook. I just found and reread it. So brilliant, so fascinating. Read the whole thing; it's full of wonderful, often unexpected responses that still are full of meaning for readers and writers and just plain old human beings.

When I was a teen and in my early twenties, I was passionate about and read virtually all of Faulkner. I was mad about Spotted Horses and The Sound and the Fury and Absalom, Absalom and more. I am sure plenty of what I read was not properly digested, and certainly time has wiped much of what I read from memory. But the books were a fine diet for a dreaming, aspiring Southerner.

My father, who rose from being a Depression-era Georgia sharecropper's child to a professor of analytical chemistry, disapproved of and resented Faulkner's depiction of poor Southerners. I always remember him when I think of Faulkner.


Some clips to entice

The writer’s only responsibility is to his art. He will be completely ruthless if he is a good one. He has a dream. It anguishes him so much he must get rid of it. He has no peace until then. Everything goes by the board: honor, pride, decency, security, happiness, all, to get the book written. If a writer has to rob his mother, he will not hesitate; the “Ode on a Grecian Urn” is worth any number of old ladies.

His obligation is to get the work done the best he can do it; whatever obligation he has left over after that he can spend any way he likes. I myself am too busy to care about the public. I have no time to wonder who is reading me. I don’t care about John Doe’s opinion on my or anyone else’s work. Mine is the standard which has to be met, which is when the work makes me feel the way I do when I read [Flaubert's] La Tentation de Saint Antoine, or the Old Testament. They make me feel good. So does watching a bird make me feel good.

The young writer would be a fool to follow a theory. Teach yourself by your own mistakes; people learn only by error. The good artist believes that nobody is good enough to give him advice. He has supreme vanity. No matter how much he admires the old writer, he wants to beat him.

The quality an artist must have is objectivity in judging his work, plus the honesty and courage not to kid himself about it. Since none of my work has met my own standards, I must judge it on the basis of that one which caused me the most grief and anguish, as the mother loves the child who became the thief or murderer more than the one who became the priest.

INTERVIEWER Some people say they can’t understand your writing, even after they read it two or three times. What approach would you suggest for them? FAULKNER Read it four times.

It's all worth reading. Read it! Or, as in my case, reread it and find it just as good and intriguing as before.
Posted by Marly Youmans at 9:24 PM