Clock of the Moon and Stars at "The Flea" 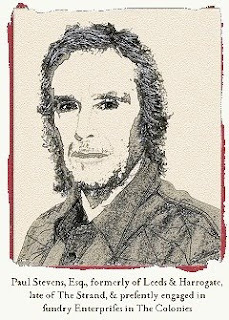 The Flea is a wondrous new 'zine, marked by the rare imagination and verve of Paul Stevens. What a sparkling, spanking-new idea for a literary magazine: http://www.the-flea.com/index.html: "THE FLEA Broadsheets are a Seventeenth Century brainchild of Mr. Paul Stevens, upon whom the conviction periodically seizes that he dwelt in that era in a former life, and indeed was an associate of Jack Donne (one of whose metaphysical meditations has inspired the title), Andrew Marvell, Will. Shake-speare, Ben Jonson, Sir John Suckling, & diverse others." Portrait of the esteemed editor is by Mistress Patricia Jones.
And here I am with my first contribution to this cunningly-designed magazine: http://www.the-flea.com/Issue2/ClockoftheMoonandStars.html
Posted by Marly Youmans at 9:40 PM

Email ThisBlogThis!Share to TwitterShare to FacebookShare to Pinterest
Labels: Clock of the Moon and Stars, Paul Stevens, The Flea