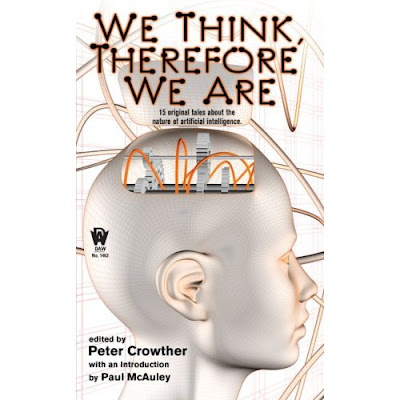 WE THINK, THEREFORE WE ARE

Somehow I neglected to mention that Pete Crowther's anthology of stories centered around artificial intelligence(Penguin/DAW) is out, including--oddly enough--a story by me. Note the interesting male-to-female numbers here.
*
Contents:
*
“Tempest 43″ by Stephen Baxter
“The Highway Code” by Brian Stableford
“Savlage Rights” by Eric Brown
“The Kamikaze Code” by James Lovegove
“Adam Robots” by Adam Roberts
“Seeds” by Tony Ballantyne
“Lost Places of the Earth” by Steven Utley
“The Chinese Room” by Marly Youmans
“Three Princesses” by Robert Reed
“The New Cyberiad” by Paul Di Filippo
“That Laugh” by Patrick O’Leary
“Alles in Ordnung” by Garry Kilworth
“Sweats” by Keith Brooke
“Some Fast Thinking Needed” by Ian Watson
“Dragon King of the Eastern Sea” by Chris Roberson
*
Harriet Klausner, who is surely the quickest and most prolific reviewer on the face of the planet, already has a review and notes, "the compilation is superb as the authors contribute diverse tales with some seemingly weird like Marly Youmans' 'The Chinese Room' adding depth and variety." "Weird," eh? This was the last thing I wrote during my Yaddo stay, and when I fired it off to Pete, he did mention something about it being just a bit different.
*
For those of you who are allergic to artificial intelligence, it may comfort you to know that there are no robots whatsoever in "The Chinese Room," though there is a computer. There are midgets and ex-jockeys and general commotion. There are sausages in bed. There is childbirth. There is pent-up love from here to China.
*
The story is based on the "Chinese Room" thought experiment of John Searle. As our friend Wiki says, "The Chinese Room argument comprises a thought experiment and associated arguments by John Searle (Searle 1980), which attempts to show that a symbol-processing machine like a computer can never be properly described as having a "mind" or "understanding", regardless of how intelligently it may behave." For more about the original Chinese room, go visit Wiki, right here.
*
VAL/ORSON
“Flap copy” for spring’s book, Val/Orson, is up at last. As I am feeble and Milquetoastish when it comes to proper boasting, I enlisted help. And now the thing seems properly flappy and boastful. See here!
*
The two limited editions (plain or signed and fancy, take your pick!) are available through the online catalogue at http://store.pspublishing.co.uk/. Thanks to bloggers and reviewers who have let me know they would like a pre-publication e-copy of the book to review or feature; if anyone else would like to sign on, write me or leave me a note here.
Catherynne Valente has written a lovely introduction as well, so that will go up some time closer to the spring pub date, along with a jacket image and other news.
*
This book is also associated with publisher Pete Crowther because he and Nick Gevers were kind enough to ask for a short novel for their novella series (U.K.: P. S. Publishing). I love to be asked, as does every writer I know, and I love it when people read and like my work and want to see more. Thanks to both of them.
e
CHILDHOOD & WRITING
E
I was talking to my mother yesterday, and she mentioned that I knew in third grade that I was going to be a writer, and that it was perfectly clear to her what I would be. Interesting. I find that I have a rather soupish memory which renders much down to alphabet when I would like to have clear text.
e
She was standing under the pear tree in our family home in Collins, Georgia. The blossoms were not quite open... This summer I canned pears off that tree. One of my childhood memories is of my Aunt Sara fishing a snake out of that tree with a hoe and killing it, chopchopchop.
Posted by Marly Youmans at 2:00 PM