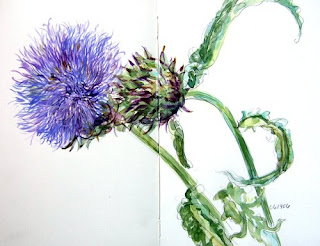 Laura Murphy Frankstone and I have a linkage of image and poem at Qarrtsiluni. Other poems of mine are coming out or forthcoming in Books & Culture, The Raintown Review, Electric Velocipede, etc., but this one is special because it's yoked with one of Laura's pictures. You can expand the picture, and there's a place for comments. As a new formal poem, this one's probably due for tweaking down the line... (To the left is a sketch from one of Laura's notebooks, a picture of cardoons in her front garden.)

2. President of FSWA
Update for the confused:
Yes, this was April fooling--part of a group hoax.

This morning I woke up to two grackles in the dryer hose pipe, fluttering and madly grackling. In fright, my hair stood on end and began to burn. What surprise to find that the birds' remarks, once decoded, were a nomination to head SFWA. Naturally, I felt flattered. However, I did not grasp this mystic injunction because, quite frankly, I am Out Of It. I was not familiar with these letters. After much questioning, I find that these impetuous, noisy birds meant for me to head up the Small Furry Wombats of America.
* 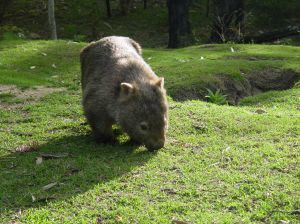 This has caused me considerable confusion, since wombats are not native to this continent. Weasels, yes. I refuse to be president of Weasels. I have known many a weasel entirely too well, and if elected to a confederation of Small Furry Weasels, I will not serve. However, wombats are endearing, at least from the distance between the States and Australia. Gladly will I run, and gladly will I serve. I imagine there are three or four wombat pets lolling about on the Southern beaches, and a few more resident in zoos, but there shouldn't be much to it except the honor. Thank you. Our ensign will be a Wombat Rampant Upon Crossed Grackle Feathers. I understand that I have the complete support of the grackles, who have now laid an egg in the dryer pipe.

Update: My suspicions were raised to the level of my still up-ended hair by some careless birdwords. The grackles, after I threatened to dry a sopping load of laundry, admitted that they had been sent by an Evil Monkey and his henchman Vandermeerkat, in order to scuttle my nomination elsewhere. Evidently the Monkey has designs on SAWF as a steppingstone to world domination, and has a messenger army of grackles, bluejays, and escaped budgies to do his bidding.

3. Reply to a zephyr

The high heaps of crystals on my two cottage garden beds have abruptly melted away, and little crowds have taken their place--pale blue crocuses, crocuses white on the inside and purple on the outside, sunny aconite, and snowdrops. Close by, the snow is deep; what bravery in the tiny things, to begin blooming while deep in their crystal hills.
* 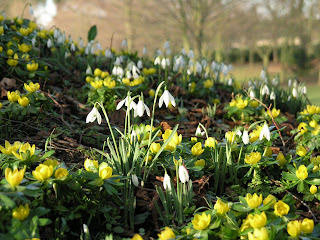 Now is the time for mirth,

Nor cheek, or tongue be dumbe:

For with the flowrie earth

The golden pomp is come.

--from Robert Herrick, To live merrily, and to trust to Good Verses

Zephyr left me--and you--a request after that last startling post--startling and heartening that a love note to poetry could elicit so many comments. Here she is:
...so, here's my question
for you and others:
what poem or picture
do you keep in your head
to keep the soul eaters at bay
while taxing, ferrying amidst stupid drivers,
herding dust bunnies when you'd rather be writing poems....etc?

Yesterday was the sort of day she describes; I had finished the taxes, but had to take children to lessons, did a major amount of housecleaning, and performed as a Saturday Mama must. In between, I sat down and read, in various snips of time, some poems by Andrew Marvell, Robert Herrick, and Hugh MacDiarmid.

Mean while the Mind, from pleasure less
Withdraws into its happiness:
The Mind, that Ocean where each kind
Does streight its own resemblance find;
Yet it creates, transcending these,
Far other world, and other Seas;
Annihilating all that's made
To a green Thought in a green Shade.
--Marvell, The Garden

All is lithogenesis--or lochia,
Carpolite fruit of the forbidden tree,
Stones blacker than any in the Caaba,
Cream-coloured caen-stone, chatoyant pieces...
--MacDiarmid, On a Raised Beach

I also read "A Blue Tale" and two other stories by the young Marguerite Duras, translated by Alberto Manguel. The "blue" story is more like poetry than many a poem: "They had to crawl on their knees into the cave, which opened to the world through a narrow mouth with cracked lips. But its deep throat was unexpectedly spacious, and once their eyes had befriended the darkness[that phrase is a bit weak, isn't it?], they discovered everywhere fragments of sky between the fissures of the rocks. A pristine lake occupied the center of the underground chamber. When the Italian merchant threw in a chip to measure its depth, no sound was heard; instead, bubbles formed on the surface as if a mermaid, suddenly awoken, had breathed out all the air from her blue lungs. The Greek merchant dipped thirsty hands into the water, which colored them up to the wrists like the boiling liquid in a dyer's vat, but he failed to catch the sapphires floating like schools of nautilus on these waters denser than the ocean. Then the young woman undid her long tresses and dipped her hair into the water, catching the sapphires as if in the silky mesh of a dark net."

Zephyr wants to know what comes into my mind when I have "thirsty hands" that reach for "sapphires" in the midst of a too-busy day. I find that there are too many to tell. But the poems that came into my mind yesterday--the ones that floated zephyr-like through, rather than being read--were the lovely "Spring and Fall," by Hopkins, that begins with "Margaret, are you grieving / Over goldengrove unleaving," and Shakespeare's sonnet that begins, "From you have I been absent in the spring, / When proud-pied April dress'd in all his trim / Hath put a spirit of youth in every thing, /That heavy Saturn laugh'd and leap'd with him." Those two are among those that often put in an appearance because I know them well, and I wish that I possessed a whole anthology in my head. I'm going to work on that idea.

One day is easier to master than all days: that one will have to stand for the others.

And she asks about pictures. My house does tend to be a bit picture-heavy. One of my more absurd goals is to obliterate the wallpaper in my office by hanging too many pictures! I have a lot of prints and paintings by friends, some of them people I've "lost" in my many moves. And I've had a passionate love for the works of various painters. Again, it's hard to say, because there are so very many. My favorite fairly-recent art show was the splendid gathering of paintings and fragments of Fra Angelico at The Metropolitan Museum of Art. To think of somebody who can knock socks off a crowd, more than five hundred years after his death! And I did think about a painting or two today: one was "The Sleeping Gypsy," by Rousseau. Growing up, I saw a reproduction of that one often, because one hung in my mother's office at the university library. Another one that drifted by was Friedrich's oil of a procession of monks winding through a leafless oak forest, toward the ruins of an abbey. When I went to MOMA last year, I found that so many painters I loved in childhood held up for me. (But I went through the traveling show of Munch paintings and found that he had lessened in his impact--and was not the same for me as he was when I saw a Munch show in London, years ago.) I suppose others may have slipped through my mind today, but those I recall.

So I didn't quite answer the question.

I answered it for only one day, and Zephyr asked for all days. But perhaps you can answer that question, asked of us all, better than I can...

***
Wombat is courtesy of www.sxc.hu and wombat fan Xavier Lukins of Paris. The photograph of aconites and snowdrops comes from www.sxc.hu and Helen Humphrey of Lincolnshire, England. Those bloomed at Belton House.
*
Posted by Marly Youmans at 4:00 PM