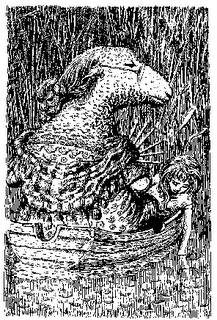 REGARDING FORAYS TO THE HORNET'S NEST

Note to self, regarding prior post: never write about sex and books on blog.

My own final flourish (at least until some other hot-spirited soul shows up) in the comments:

Let all writers follow the thread of story until they reach the heart of the labyrinth, whatever it contains.

That's where I stand on writing.

That's where I stand on children, teens, and reading.

"What I’m more interested in is the teacher who is not trying to convey a message about sex or anything else but who shines with passion for books, and who can help a teenager catch a little spark of that fire."

I stand by this.

The December 5th post from my beloved e-haunt, Giornale Nuovo, contains poems, quotes, and "details from a set of sketches and completed drawings done by Mervyn Peake for a projected illustrated edition of Dickens’s Bleak House, which, however, never came to fruition." Go see! And the transforming-to-sheep picture above is, of course, from his illustrations to the great Lewis Carroll.

OTHER PEOPLE SAVING US THE TROUBLE OF THINKING

At The Reading Experience, Dan Brown* has continued and amplified--I think this is one of his gifts, to latch on and develop--my post on rereading. I find in him much that is of interest, whether I agree or disagree, plus an appealing streak of the curmudgeon!

*Penitential update: Note what a rollicksome, careless mood can do. Poor Dan Green is now Dan Brown. From here on out, I shall either expect him to be an absurdly weathy fellow or else give him a different color name whenever I meet him--Dan Pale Ecru, Dan Lavender, Dan Puce, Dan Lemon Yellow, Dan Dandelion Silver, and so merrily on.

It must be the Bleak House illustrations.

Or maybe it is because Cooperstown is, as always, wonderfully dressed for Advent, and has an old-fashioned, Old World feel--rather like the corner of St. Michael's churchyard in Charleston, South Carolina that Henry James declared the most English bit of America.

Perhaps it is because I am reading and liking Clare's 98 Reasons for Being.

I feel quite, quite rollicksome (a portmanteau word in honor of Carroll.)