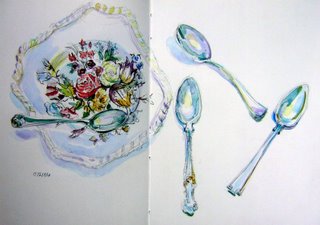 No, I'm still taking a blog-sabbatical until after Labor Day. But I need to say that my friend Howard Bahr has sent me my very own copy of his brand new book, The Judas Field. Jump on the skateboard and fly down to your favorite independent and buy it! And if you hurry, you can be the very first soul to say a word about the novel on the Amazon River of book sale web sites. I met Howard via the horrid institution of The Blurb Request, but our penpaldom has brought me much pleasure, in and out of books.

In addition, another friend has a new nonfiction book that will be out at summer's close: In the Morning: Reflections from First Light, to be published in September by Mercer University Press. "This book of quiet essays is a very personal look at morning from many aspects—scientific, artistic, philosophical, and religious." I was supposed to meet Phil Williams at the Nashville Festival of the Book, but fate put his back out of joint. But we've been loyal penpals since then. Oddly enough, NFB is where I met Howard with his famous professor pal, Randy Cross.

Meanwhile, somebody I 'met' through magazine acceptances--the editor of Argosy Quarterly--has the first in a big fat series of young adult books coming soon: Apocatastasis, his livejournal blog, contains many of his pictures for Here, There Be Dragons. His plethora (and I mean plethora) of enterprises is featured on his Coppervale web site. You can even find Argosy there. I'm expecting that the dragons will bring him treasure and further issues of Argosy. That's James A. Owen, projector on a grand scale.

Oh, and be sure to go by Laurelines, where Laura Murphy Frankstone has moved on to the most delicious glass and silver and vegetable still lifes. Above is July 21st's watercolor, and you can even read what I said about Laura, Hawthorne, the Other, and the mysterious and infinite replication of artists--or something like that! Just don't take my story seed. Pilferage is mine!

And confetti and happy July 22nd birthday to B, my eldest! He's six-foot and seventeen, fresh home from Turkey and Greece.
Posted by Marly Youmans at 4:00 PM