My Puritan story at CT... 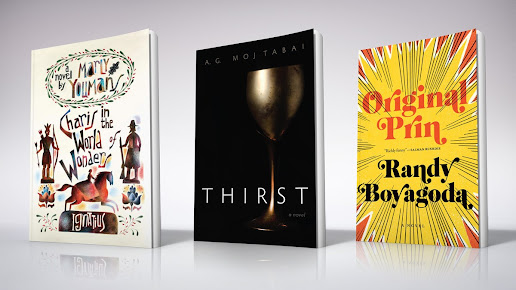 Charis has clambered on top of the new-and-noteworthy reviews at Christianity Today. I'm very glad to have that attention, and happy for the words of reviewer and novelist Heather Cross.

Set in Massachusetts Bay Colony during the 1690s, Charis in the World of Wonders plunges us into the mind, language, and worldview of a young woman struggling to survive yet finding grace in unexpected places. Youmans’s lush prose evokes a preindustrial, perilous, socially connected world in which the Divine has sovereign reign over outcomes both joyous and sorrowful. Reading it feels like traveling through time and space to experience reality laid bare: Life is fragile, humans need each other, and the created world is shot through with beauty, fear, mystery, and God.


WV
After returning from a six-day jaunt in West Virginia (and a bit of Virginia), where we pondered retirement possibilities for the still-distant future and met up with Progeny no. 3, I have been rather lukewarm about all things social media-ish and the blog. Also lazy about submitting anything.... and the only new publications are print-on-paper, so nothing to report and link to online.
Nevertheless, here I be!
RIP
You might like to read Aaron Belz's piece on Norm MacDonald at Front Porch Republic, HERE. Twain, comedy, manner-of-telling, death-mindedness, and more.

Norm Macdonald: You know, I think about my deathbed a lot.
Vulture: What do you think about it?
Macdonald: I think I never should have purchased a deathbed in the first place.

PJP
And I'm grateful to Paul Pastor for mentioning me along with some fancy names in a brand new interview from Michael Wright's Still Life newsletter.  Several mentions there could make me big-headed were it not for my Southern ancestors, who squashed humility into me when I was but a wee aspiring child poet. Suggestion: how about you read the interview and then (later this fall) go and buy his upcoming book, Bower Lodge, forthcoming from Fernwood Press?

More WV
If you're ever in Lewisburg, WV, don't forget to eat dinner at Stardust! What else did I find out in the Virginias? Well, I still like Lexington and Shepherdstown and Harpers Ferry. And Bolivar and Charles Town are lovely. Also rambled around at Grandview in the New River Gorge National Park. 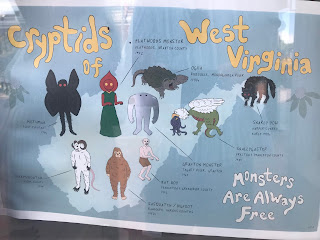 And just to bring up the tone, here's George Washington's bathtub from Berkeley Springs, WV... Actually most of it doesn't show--looks a bit like a watery stone grave. Just a tad creepy. Sadly, the presidential site turns out to be a fake--he did hang out in one of the stone tubs at the not-all-that-sizzling hot springs, but we don't really have his personal slot in stone. Be sure and bring a big ole bottle if you go to the state park, and maybe even your swimsuit. 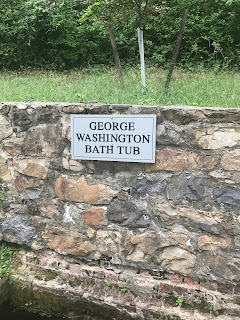 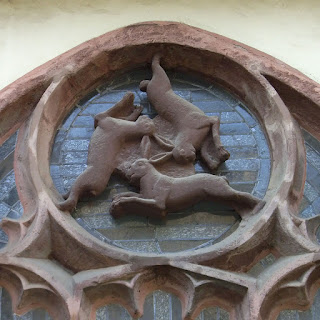 Thanks to Conor Sweetman and the staff of Ekstasis, who recently accepted a couple of poems of mine; the first can be found HERE. If you want to know more about the rabbits--hares, really-- you can see a Cornish tin miner's  badge here, an Alsace puzzle plate here, a Mogao Caves temple decoration here, a Jewish tombstone here... And there are many more examples, in many cultures.

In England and Europe, the three hares appear to have been adopted as a symbol of the Trinity, and certainly they are three-in-one in an Escheresque manner! Syncretic symbol? In part because rabbits are linked to fertility, I think of the also-fertile green man motif. I've never understood the reason academics don't see why Medieval churches adopted the image of the green man, often shown as vomiting leaves. Surely he is an emblem of new life and creation. Moreover, he speaks creation like the God of Genesis, who says, "Let there be light: and there was light." The green man is a rude thing, sure, but clearly bursting with life and its enchantment. I expect the Gawain poet with his Green Knight would've understood. The three hares seem a similar borrowing, an understanding that patterns underlie the nature of the world and are meaningful, even when they seem a bit homely and countrified. The three hares remind me of what composer John Taverner called images or verse of "primordial innocence," work that is simple and beautiful and childlike. For him, that's always connected with being open to revelation, ready to receive something from beyond. 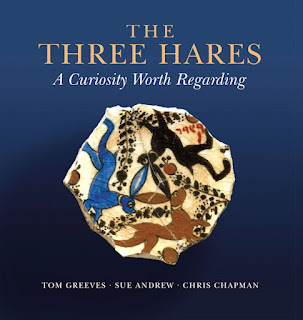 Thinking of Taverner and beauty...

His Three Holy Sonnets (inspired by Donne's "Spit in My Face," "Death Be Not Proud," and "I am a little world") were written when he was fifteen. And I'm still thinking about how Stravinsky looked at the score and wrote "I know" on it. So many possible reasons to write such a thing!

Interesting to have good work remaining from the teen years. I regret throwing away all my poems when I was twenty and graduated from college. They were fantastical and full of youth, whatever else they were. In love with sound and enchantment. And I should never have gone on to graduate school. It was not good for my poems. Unlearning took me a long time.

STILL IN A MAYBE-ISH MOOD

Though I've been doing too much travel and have too many strenuous things to accomplish this year (not bookish things!), I'm again thinking about writing another long poem, as I mentioned before. I've been surprised by how many people have read and liked Thaliad (that is, in the smaller scale numbers of poetry), but even more years of Western cultural decay have passed by since that poem was published, so that I find that I now have some doubt of readers picking up a long formal poem.

But I still might do it, at least for myself. I have a good deal of work I've never tried to publish, and not everything has to be sent out in the world. Still pondering.

I'd forgotten this poem by the time it appeared. I've written stories with women in trees, and wrote a whole novel once that kept a woman high in a redwood. I've written poems that were self-portraits-as-dryad, and trees often invade my lines. So it wasn't surprising to reread and find that by the close I had found it worthwhile to communicate with a tree.
Thoreau crept in, who also loves trees, and also those wandering Walden-girls who pick up radiant leaves. I suppose the whole poem is a sort of gathered leaf that "improved the time." And who I am but one of those girls, grown older? A noticing sort of girl who picks up leaves.
And what does it mean to see the a tree as the axis mundi, the center of the turning world? The tree from that mountain garden of Eden, the knowledge of good and evil, turned by legend into the cross on the hill that drips blood onto the buried skull of Adam? I hadn't remembered the poem, and so was surprised that the leaves become a series of radiant words.
Well, it was pleasant to see it again. And to remember the moment of stopping to stare at the corner of Fair St. and Church St. That rain-slicked, brilliant tree! It seems a lonelier poem than I expected when I began to read. All that saying of logoi at the end, and yet the woman is alone, alone in her invisibly-walled, rainless room. Perhaps she had to be lonely to know that all things are speaking.
* * *
I've only been writing poems of late because some parts of life demand such large chunks of time devoted to family that it seems impossible to plan a novel. But I keep thinking of an idea for another long poem like Thaliad. Though I never thought about Thaliad before I woke up with the story in my head, ready to jump out onto the page. So maybe this one is not so urgent.
And maybe I"m done with novels. Who can say? The world isn't begging for one of mine, anyway, so there's no rush. And time always does tell...
* * *
I've started studying Russian--I had a wisp of it in college and have been doing Duolingo for a couple of weeks. Today I received in the mail a pared-down grammar, a book of conversations, and a book of easy stories. We'll see how long I can stick to it!
* * *
Here's a tree-ish thought,
a pressing thought,
a Russian thought for the day:
"To destroy a people, you must first sever their roots." --Aleksandr Solzhenitsyn
Posted by Marly Youmans at 2:37 PM 15 comments: